Founder and leader of popular Nigerian church, Christ Embassy, Pastor Chris Oyakhilome touched on a quite sensitive topic while preaching and his stance on the topic has had some Nigerians enraged.

The pastor is heard saying “Woman was not God’s original idea” and Nigerians – especially feminists – are furious.

Although it’s reported that the preaching which has gone viral is an old one, people are still irritated by what he said about a woman.

Watch the video and read reactions below, 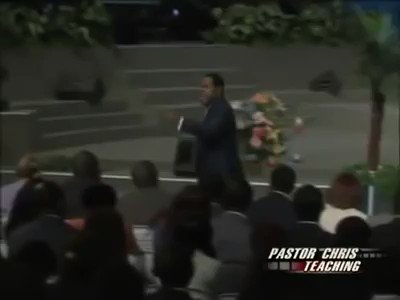 “No husband wants another mother. Get it now!”

1,037 people are talking about this

It is now Pastor Chris said and not Bible said, You people should just download Bible in pdf and edit the part you don’t like.

@SledgeAma: Leave Pastor Chris alone, he is right . If you are getting married according to the Bible, a wife should be submissive to her husband and the husband is to guide her, love and cherish her. Carry your bitterness and go abeg…

@De_Con_Troll_aH: The truth about this Pastor Chris sermon is that the people against him are not true Christians or their level of understanding is as that of steak. Don’t be a feminist before you be a reasonable person. Don’t just jump and scream misogyny over everything that you don’t get.

@indliteoftruth: A man love the one he serves and the one that serves him, but he fight the one that’s equal with him. Pastor Chris No husband wants another mother. Get it now! Pastor Chris Oyakhilome

Read: How I Rescued A Girl From Prostitution

@Tom_Tom23BJ: Pastor Chris has made everybody on the TL to be studying the Bible today

@Adunni_Achebe: U can’t be a Christian or Muslim a Feminist. If u think otherwise, u’re either confused or have a bad case of Cognitive dissonance. Abrahamic religions clearly state that God made d Woman to assist Man. Aunty, there’s no equality in Zion.
Pastor Chris jst exposed ur ignorance.

@uzi_an: The way Nigerians drag pastors is alarming!!! Even those that dont goto church or read the bible. It was Pastor Adeboye the other day… Today is Pastor Chris! Can we just concentrate on the issues plaguing Nigerians? I think the major issue here is misplaced priorities #SMH

@akinalabi: A wife is an equal partner. The husband is not a master. Stop teaching rubbish Pastor Chris.

@vanessah_kei: “The reason God made woman was because if the man. The woman was not his original idea”. This is what Pastor Chris, who went to Bible school thinks? The same God who is omniscient, who knows the end from the beginning, who knew the role Esther would play in saving his people?

@damistargirl: I can’t believe people are sitting down, listening and hailing Pastor Chris for saying this. This is misogyny in its highest level. No wonder his wife left, I hope she gets back all the years she spent with this sexist human being.